Learn to understand spoken English with a story about my 2 scars!

In the second video in this series, I want to help you understand spoken English by talking about the two scars I have on my chin, one from each of my sisters. Stories like this will give you great English listening practice, and will give you examples for telling your own. You can also think about how stories change slightly over time, so you can improve your English fluency by telling slightly different versions of stories for different situations.

Enjoy this advanced English listening practice lesson video featuring me speaking at faster-than-native speed that will help you understand spoken English, and let us know what you think in the comments!

(Listen carefully to understand spoken English and practice speaking along with this advanced English listening practice lesson with our customizable fluency-training video player! Select the speed of the video, the amount of spacing between speech sections, and the the number of times each speech section repeats. You can also click on a speech section in the transcript to jump to that part of the video.) 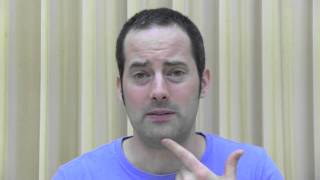 Click on a section of text below to jump to that point in the video.

This is Drew Badger, the Co-Founder of englishanyone.com.

It is a pleasure to be seeing you again.

Well, the previous video in this advanced listening practice series got over 10.000 views, so I’m releasing the next one,

and just like that video, if this video gets over 10,000 views I will release the next one.

So, the more you can share this with other people and like the video and get it, uh get it to spread out,

so telling other people about it, if they’re looking for more advanced listening practice,

uh, the faster I will release new lessons.

you get to have some experience with that and then normal con, normal conversations, and normal situations,

or even watching movies and TV shows, it becomes a little bit easier for you.

So the point here is to still speak, uh, clearly and still teach a few things as I’m explaining things,

but to be much faster and much more conversational with the way I speak.

If you’re looking for a bit more of this, you’d really like to hear conversational dialogues and learn a lot more phrases and expressions,

that’s where I do all of my fast teaching and speaking, and you get to learn lots of phrases and grammar and improve the way you speak,

and sound much more confident and get fluent faster.

If you’d like to learn more, you can visit us at englishanyone.com, and look Master English Conversation.

I look forward to seeing you in the program if you’re not already a member.

Well, anyway, let’s get into this,

the kind of super-fast, a speedy advanced listening practice exercise.

Anyway, today I wanted to talk about something, you know, I want to introduce myself a little bit more.

I know you know a little bit about me,

but maybe you have some questions about me and these are other things I can maybe possibly answer in this, uh,

in this listening practice thing where I’m talking a bit more about myself and not necessarily teaching anything about the language,

even though maybe I’ll talk a little bit about specific things, or teach other things like that.

Look how quickly I’m going, so fast, this feels fantastic to be speaking with you quickly like this.

You know, I get all excited.

You know, somedays I actually think, you know, I, I’d like to teach some other things in addition to teaching English, just because,

you know, there’s a lot of things, you know, especially like business and gardening and other things like this that,

you know, I can actually get a lot more information out to people quicker because I can speak more quickly like that.

But, anyway, today I wanted to give a little bit more,

maybe a little bit more background about myself, and I thought I’d talk about just an interesting story,

and maybe this will give you something to think about as well.

and he, um, and he has something interesting things, kind of some facts about himself that he’ll tell people.

Uh, you know, it’s just kind of something different and something interesting and new about him that helps other people remember him in that way.

And one of them is the fact that he’s allergic to Christmas trees.

Which is really funny, so he’s never had a real Christmas tree in his house, he’s always had a plastic a tree.

Uh, I really love an actual Christmas tree and the smell of that in the house,

it’s really great, but in his case he couldn’t do anything like that.

So he’s allergic to Christmas trees.

is I’ve got two scars.

Let’s see if I can get closer to the camera.

Kind of hard to see here.

So I’ve got two scars on my chin, one from each of my sisters.

I’m the middle of three children, I have an older sister and a younger sister,

and, you know, this is just a quick story about how I got this scar from each one of them.

So, I think I got the, uh, the older, uh, my older sister gave me the first scar.

You know, we were playing in my house and she was holding me by my feet,

uh, just one day we were playing.

And then she let me go,

so she let my feet go and I went flying,

on the, uh, the edge of a windowsill.

So when you’re looking at a window, it’s actually interesting when you go into these kind of particular things about the language,

there’s so many tiny, insignificant things that maybe you wouldn’t know the word or the answer to, something like that,

but it’s really interesting to think about.

So you got the window itself, and the actual glass,

this is called the window pane.

But the windowsill is the little, the little, kind of shelf part on the bottom where you can put flowers and other things like that.

This called the windowsill.

So it’s a place where you can, you know, whatever, put your little drink or something like that.

So, anyway, she threw me at this thing, and I went gah,

and I split my chin open here.

I split my chin open.

But, I’m still alive and I’m here to teach you today.

Now, the other one, this is from my younger sister, and this is where we went out to a, um, I forget how old we were, maybe we were, I don’t know, maybe 10 and 8 years old, or something, we’re about two years apart.

So this is a great way to describe, you know, an age difference between you and somebody else,

uh, or there’s a four-year difference.

But apart is a really great conversational way to express this.

So my sister and I are two years apart, so I’m older and she’s younger.

You know, when I was younger we used to, I used to go out with my family a lot.

It’d be like my mom and my two sisters and I, we would go out,

go out and do a lot of camping,

and we would get in the car and drive to all these different places.

We would go out west, as they say in America.

So I’m from Chicago, and we would get in the car and drive out west because, you know, my mom just loved the scenery out there.

Chicago is very boring and flat.

We do have a nice lake, but there’s no mountains and no ocean, things like that.

So we went out west to try to, uh, you know, experience some more of that.

Uh, and I was trying to get out of the pool so I would, I swam to the edge of the pool,

the lip of the pool, and I would try to get out.

And my sister, for some odd reason, for some stupid reason, she pushed my head down,

and then I split my chin again on the pool.

So I think I probably even split the same scar that I had for the previous one from my older sister, which is really weird.

But, so I got, uh, a way to remember both of my sisters, a nice thing like that,

so I’m really happy that I have, uh, you know, I got this experience.

And now, like, the problem is that because I have a scar there,

when I try to grow a beard or a beard grows out, like it comes out patchy.

This is a really great word that means there’s like kind of little places,

you know, where you have a scar and the hair doesn’t grow out there anymore.

So if you have a, you know, when you’re young you don’t have a lot of scars on your face,

but as you get older maybe you get some scars, and,

you know, the beard doesn’t come out, you know in like a weird way.

Sometimes I actually hate shaving, it gets kind of like on my nerves.

This is kind of a tangential thing,

a tangential thing where you’re going to talk about something else that’s related to that.

But, anyway, just, you know, thinking about this idea about shaving.

Maybe I’m going to get like laser treatment on my face, like get the little laser thing to zap

my face so I don’t have to shave anymore, because it’s a real, it’s a real pain in the ass.

maybe, maybe for the ladies, if you’re a man out there maybe you can talk about that in the comments too.

It’s a pain in the ass, really.

But, anyway, I don’t want to give you too much information, but really you should go back and watch this many, many times so you can listen to me,

and you can really get a sense from my blending of the pronunciation,

and the words I’m using, and, and all the things that I explained as well.

So go back, watch this a few times, and again,

be sure to tell other people about it, and make sure this gets over 10,000 views so I can release the next one.

Have a fantastic day, and I’ll see you in our next advanced listening practice lesson. 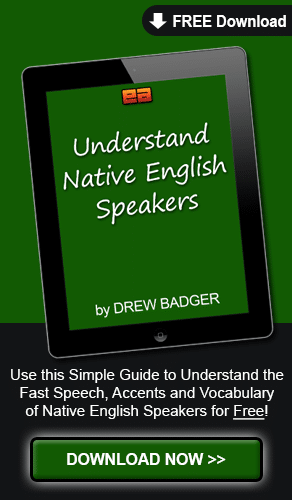